Was at the airport- excited about going to Rome

I took a picture of the departure monitor and started ‘people watching’ trying to guess which city they might be headed to. People watching is so fun, especially when they are traveling. I’ve seen some pretty gnarly spats between couples. Travel can really bring out some ugly behavior. I’ve also seen people push children, yell at ticketing agents and brazenly cut to the front of lines. On one plane, men stood up and laughed at female flight attendants telling them to sit down and put on their seat-belts. I won’t name the place we were (don’t want to offend)- where as soon as the plane touched down, everyone got up, grabbed their bags from the overhead areas while smacking some people in the heads, then started pushing and shoving to get to the front of the plane! It was worse than first graders waiting for the door to open for recess! Everyone joined in the madness so quickly- it’s like they were afraid they would be left behind alone on the plane or something. So weird, but I liked watching it. Some of the events we’ve witnessed are like big sociology experiments. Mob mentality is a freaky, scary thing!

We had a layover in Istanbul so we had to have authentic Turkish coffee. We had it in Egypt and the Middle East, as well. It kicks your butt- in a good way. The end is very thick and mud like and I always felt like I had to rinse my teeth after I drank it- but ‘ahhhhhhhh’ so worth it. 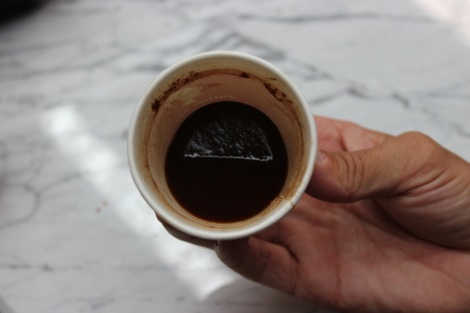