All is well, but Emerson had an altercation with a crazy beach dog on koh lipe and got bit. It drew blood and left a bruise. Not good. We talked to the people who own the bungalows on the beach where it happened and they said “That dog is loco! He bites children all the time.” I was like ‘What in the world?!’ The guy said the dog is not sick, no rabies – don’t worry about it. I quickly grabbed a guide book that has a section on rabies that basically says if you get bit by a dog that has rabies and you don’t get treatment, the fatality rate is 100%. If the dog that bit you has rabies and you get the series of shots, your survival rate is 100%. We weren’t quite sure what this dog’s story was and we were on a remote island in Thailand…. So, we immediately decided to head to the island’s “hospital.” We had to walk through town and where the locals live. There was lots of garbage and more stray dogs wandering aimlessly. Man, they were everywhere. We got to the clinic and there was a woman treating a guy with gnarly looking marks on his stomach and arms. He was stung by sea urchins. We tell them that Em was bit by a dog. A man hanging out near the entrance of the building says he’ll be right back and runs over to a group of guys playing soccer on an old cement court. A couple minutes later, a doctor runs over all sweaty from his game and says “what is problem?” We show him the bite and he says she needs rabies shots. Two shots/one in each arm on five different visits, within 28 days. Yikes! The woman filling out an information card tells us when to come back, but we tell her we are traveling the world and will be moving around a lot. Her and the doctor start laughing, but are rubbing Emerson on the head. I take this as a good sign. They say all countries will have the vaccine she needs because stray dogs are an issue in Southeast Asia. The doctor gives her the shots (they are in the arm, not the painful ones they used to give in the stomach back in the day. Thank goodness.) After the shots, he rubs her head again and laughs while yelling “stay away from dogs!” then re-joins the soccer match.
Emerson handled the whole situation amazingly well. She is one tough cookie! I was going to post a picture of her with shaving cream on her face saying she was foaming at the mouth, but no one else thought it was as funny as I did. She chose these photos instead. One is her pointing at the island of lipe working through some anger issues toward that dog. In the other picture, she is pointing at koh lanta. A really nice island with fewer strays wandering the streets. She was much happier! “What doesn’t kill you, makes you stronger!” 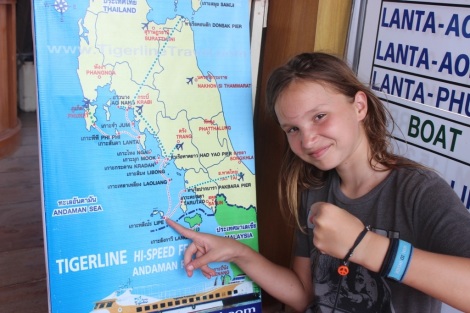