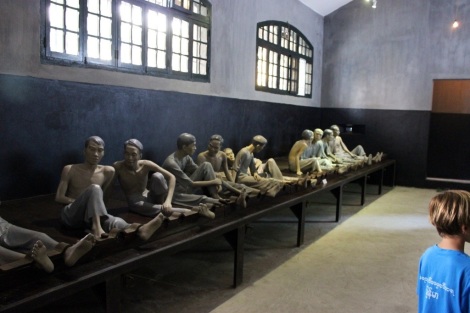 This was a prison that was built around 1886 by French colonists and was used to hold Vietnamese prisoners who were fighting for their independence. The pictures in the museum from that time period are horrific. The French were, apparently, big into cutting people’s heads off and putting them out for the public to view- trying to deter others from ever fighting back. There was also a guillotine (a head cutter-offer) on display. One of two that were used quite often.
The prison was later used by the North Vietnamese to house prisoners of war from the Vietnam War. Here in Vietnam- they call the war the American War of Aggression. The museum placards claim that the prisoners were treated well at the prison, but the POW’s stories do not coincide. The POWs sarcastically nicknamed it Hanoi Hilton.
I will refrain from making any further comments on that at this time, but I do have to say I am glad that we went. We sat down and talked about it with the kids for awhile after we left. Lennon didn’t like the one guy in the cell- but he wasn’t scared of anything else. Interesting. Em and Maddux were intrigued by the stories of prisoners escaping through the sewer tunnels. The prisoners were so skinny, they could actually fit through incredibly tight holes.
We also talked about always fighting for what you think is right. Some of the people we read about sacrificed their lives for what they believed in. This was some pretty heavy stuff that made us all think!