I think this kid might have been a pathological liar

The kid behind Emerson followed us for about half of our hike. He started off in the beginning of the stream with a chalkboard sign that basically said that his mom and him would watch our shoes while we hiked in exchange for about a dollar. We thought ‘what a little entrepreneur’ and put our shoes on a shelf. He must have had us pegged for suckers because he caught up with us soon after we started and began trying to sell us a ride on an ostrich. What?! That’s weird. We said no, so he wanted to show us a special waterfall (if we paid him, he’d take us.) Actually, the stream dead-ended at the waterfall. It is safe to say we would have found it on our own. I asked the kid how old he was- he did the number sign for 15. I said, “If you’re 15, then I’m 25.” He smiled and said ‘yes!’ He started getting a bit mad that we weren’t falling for any of his scams and just outright asked Jesse to give him money. (Sometimes they ask for money from foreigners because it is considered lucky. Jesse said ‘isn’t all money considered lucky?’) Jesse told him to quit hustling and go to school. We needed to lose the kid- he was starting to take away from our enjoyment. Two of his friends came out of the trees and started asking him questions. I told everyone to run and don’t look back!!! We got back to our shoes and he magically appeared! He wanted us to pay him so we could get our shoes back! Just kidding- but I would not have been one bit surprised if he would have tried a scam like that. Some of these people are crafty! 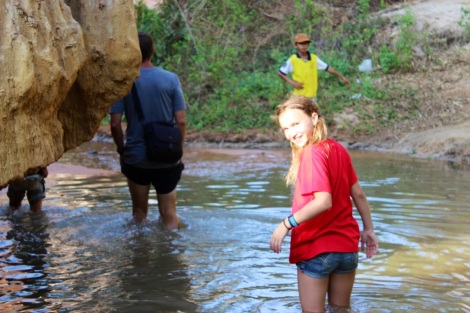