Quick history lesson. This information was taken from a website about holy sites in the world.
“The Wailing Wall or Western Wall is in Jerusalem and is believed by many people to be the remains of one wall of a great Jewish temple or the wall surrounding the temple’s courtyard. It is a stone wall that extends about 62 feet (18.9 m) above the ground. The wall is considered to be a sacred site by Jews, and thousands of people make pilgrimages there each year. It also is a source of much dispute regarding its true history as well as a source of contention among Jews and Muslims, who consider it to be part of an ancient mosque or the wall to which the seventh-century Islamic prophet Muhammad tied his winged steed during his Night Journey.
Temple Wall:
Jews and many other people consider the wall to have been part of a Jewish temple, also called the Second Temple, which stood for hundreds of years. King Herod ordered a renovation and expansion of the temple in about 19 B.C., and the work was not finished until about 50 years later. This temple was destroyed by Romans in about 70 A.D., only a few years after its completion. The Wailing Wall is widely believed to be the only part still standing.
After the temple was destroyed, many Jews began going to the wall to mourn the temple’s destruction and to pray. The name Wailing Wall was ascribed to the site by non-Jews who saw the Jews mourning there. Jews actually refer to the wall as the Western Wall, or Kotel HaMaaravi in Hebrew.
Al-Buraq Wall:
Many Muslims believe that the wall has no relation to ancient Judaism. They refer to the wall as the Al-Buraq Wall, a reference to Al-Buraq, the winged steed that Muhammad is said to have ridden. Muslims believe that Muhammad tied Al-Buraq to the wall while he ascended to heaven to speak with God. Many Muslims also believe that the wall was part of the ancient Al-Aqsa Mosque, and that Jews did not begin praying at the wall until at least the 16th century, if not much later.” 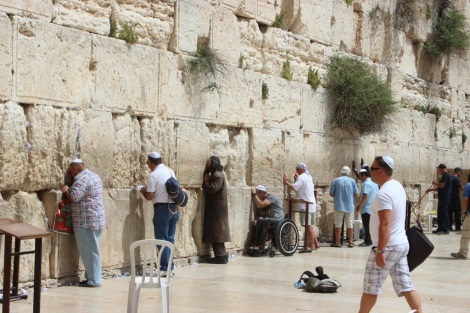