Whoa- there is such a stark contrast between Israel and Palestine. Palestine appears poor and third worldish, while Israel seems ultra modern and wealthy.
We drove through two of the refugee camps on the way to Bethlehem. What I loved most about the experience was the graffiti – it is fascinating. Some time last year after we had watched a few documentaries on different art forms- I asked Maddux what he wanted to be when he grew up and he replied “a graffiti artist.” This is certainly the place to go to gather inspiration! The art is beautiful and haunting- I loved how the graffiti (for the most part) was positive and hopeful. We could have spent a few hours there- it’s like a huge museum spread out on vast concrete canvases.
There is a more famous one that I got a quick picture of as we were driving by. It was done by an artist named Banksy and it is of a little girl patting down a soldier. Because of “security risks” it is extremely difficult for people from certain ethnic groups to travel in certain areas. We got through checkpoints relatively easily by showing our US passports. They obviously know we are tourists and aren’t going to stir up any problems in regions that are oftentimes portrayed as being extremely volatile. I don’t think many tourists roll through Palestine- but when we did, we didn’t feel threatened or scared in the least. It is one of my top five experiences of our adventure and I would encourage others to go there. 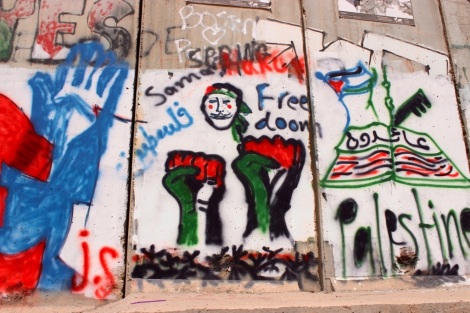