We were in awe of the Nuremberg Laws which outlawed human and civil rights. At the annual party rally held in Nuremberg in 1935, the Nazis announced new laws which institutionalized many of the racial theories that the Nazi party embraced. The laws excluded German Jews from Reich citizenship and prohibited them from marrying or having sexual relations with persons of “German or related blood.” Jews were completely deprived of most political rights.
As you go along the museum and follow the timeline of events, you can see Hitler’s entire rise to power was ludicrous.
The picture of the skeletal naked men is horrific. How could soldiers hide behind the fact that they were “just doing their jobs and following orders.” Sad, sad, sad- but important for people to see and learn about. 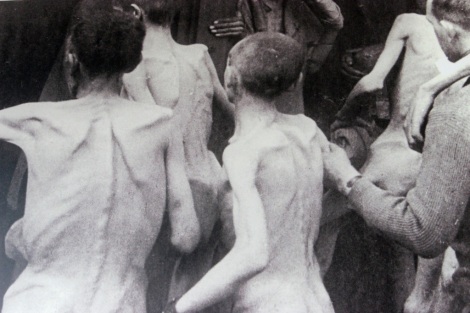 Notice the sculpture in the back. It is made of iron I think and looks like skeletal bodies intertwined- much like the photos of the piles of corpses waiting to be cremated and the ones soldiers found in various places when the camp was liberated.