Jesse and I want to be like Michel and Michelle when we grow up!

Remember Pierre from Dubai? (We stayed with him, his wife Florence and their three boys Jules, Luca and Clement.) He told us that he and his parents have a house near the beach in Hendaye, France. His parents, Michel and Michelle live on the bottom floor and Pierre’s family has the top. Wow! This place was wonderful. Michelle had got us groceries so we walked into a little home that was perfect – plus the walk to the beach was only three minutes!
The best part of our trip there (besides the surfing and boogie boarding for the kids) was spending time with Pierre’s mom and dad. His mom spoke English pretty well. His dad only spoke French. Jesse helped translate for us. Thank goodness his dad used lots of sound effects (reminded me of my dad) and hand gestures. They’ve lived really good lives and their stories are fun to listen to. Michel, Pierre’s dad, was actually born in the house (he said he was born breech and when he came out they thought he wasn’t breathing- so someone picked him up by an ankle, whirled him around in the air a few times and, voila!, he came to life!) Jesse told him that explains a lot!
Good thing Michel went on to live life, meet Michelle (on a beach when they were young) and have kids. Two great people made a great son (Pierre is very “special” – his mom says so!) They are now proud grandparents with six grandchildren!
They had us over for dinners (food was delicious) and the conversation was filled with talking about Michel’s time in the desert with the army in Algeria, talk of world politics, the US (Michel really likes America!) and lots of laughing.
Every time Jesse and I would leave them, we were blown away by their sense of humor, warmth, hospitality and kindness.
Merci! Merci! You must come visit us some day soon!!!! 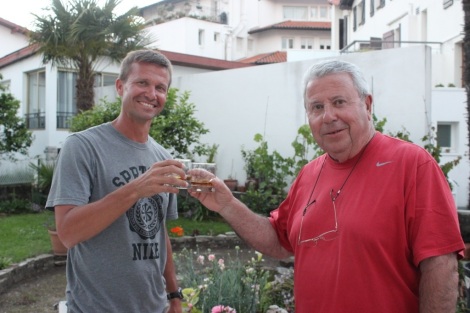